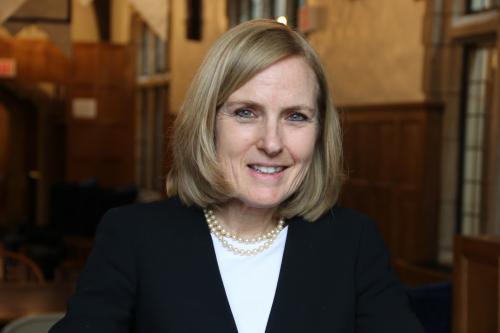 Margaret Carnright, assistant director, Yale Educational Travel, started smoking in the late 1970s, after a dare from her older sister. By 1984, she had tried to quit a few times with limited success.  “In those days you could smoke anywhere. The big difference between then and now, there were no resources, no patch, no gum, literally nothing,” said Margaret. During those years, smoking was part of the cultural norm.  Movies featured people smoking, and tobacco ads were still prominent in magazines and on billboards.

The culture around smoking was about to change with the passing of several Congressional acts. In 1971, the Public Health Cigarette Smoking Act was passed, banning cigarette advertising from television and radio. Since the 1960s, there had been warning labels on cigarette packages, but the language was not strong enough. Then the Federal Cigarette Labeling and Advertising Act was passed forcing cigarette companies to put a stronger warning from the US Surgeon General on all cigarette packs and advertisements. That law went into effect in 1984, the same year the nicotine patch was invented, and coincidentally the same year Margaret quit.

While Margaret had tried to stop smoking a few times, the final try was somewhat unexpected.

“I was staying at my parent’s house for the Christmas holiday, and we were talking about New Year’s resolutions. I announced that I was going to quit smoking,” said Margaret.  Her younger sister, a non-smoker, challenged her to start immediately. Margaret was now determined. Hours later, trying to put off the cravings, she went for a walk. The walk was chilly, but the cravings were strong. Luckily, she was out of cigarettes. After walking to several stores hoping to buy a pack of cigarettes, she realized that nothing was open due to the holiday.

The next day she woke up having not smoked for 24 hours.  “I thought to myself, maybe I can hold out for another 24 hours, and that turned into days, that which turned into weeks,” said Margaret.

Don’t give up! The first time you quit it may only be for a few hours or a day. That’s ok, it’s a start. But the next time you know you can last that long and you will be able to go longer. Just keep trying.

* The nicotine patch was first invented by doctors in 1984 at UCLA when they discovered that a transdermal nicotine patch could help people quit smoking.