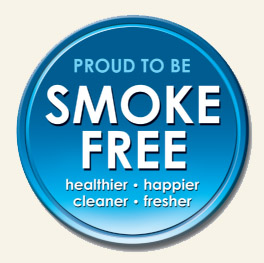 Many people who smoke want to quit and have tried to stop multiple times.  On average, it takes smokers four to six tries before they are finally smoke free.  Once such individual is Kathy who works at the Yale School of Medicine.  She started smoking at the age 19 after having tried it a few times in high school.  “It started after a bad prom experience,” she said. A short time later she began dating her future husband who smoked, and she quickly picked up the habit.

Kathy smoked for the next 17 years and then decided it was time to quit. For the next 3 ½ years she was smoke free. After that she went through a phase where she started and stopped another three times.  During those years, she tried different smoking cessation methods from the nicotine patch to cold turkey. These methods worked getting her to stop initially, but the cravings were always there. “When I’d smoke it was usually about a pack a day,” said Kathy.

Early this year, she quit again after being inspired by a self-help book entitled “Allen Carr’s Easy Way to Stop Smoking.” “Not sure why this did the trick, but just reading that book helped curb my cravings, it was easy,” said Kathy.  This time she and her husband decided to quit together, and so far it has worked.  “He is using Chantix. In the past I tried Chantix which was helpful, but this time I attribute quitting to that book.  I’d highly recommend it, especially for those folks who have tried other methods,” she said.

Ironically, on April Fool’s Day, she was diagnosed with breast cancer. “Because of this diagnosis, I will NEVER smoke again,” she said.  While she is dealing with her illness, she has some advice for others trying to quit.  “No one can tell you to quit.  You have to do it for yourself. Don’t give up it will happen eventually! And don’t beat yourself up it will take a couple of tries.  My primary doctor told me he smoked, and it took him a few times. Have faith it will happen!”

Kathy feels positive that she will never smoke again.